Bullfrog Tadpoles are great algae eater for your pond. Helping to keep everything cleaner in your water garden.

One of the so-called “true frogs”, Bullfrogs are usually green to greenish-brown. Sometimes, particularly when found in the South, they are spotted. Their eyes are gold or brown and they have a broad flat head and body. They grow on average to be about 3 and a half to 6 inches (9-15 cm) long in body length (although there are records of some as big as 8 inches!!), legs add another 7-10 inches (17 – 25cm) to length!

Females have an eardrum (tympanum) the same size as their eye. Males eardrums are larger.

These guys have a voracious appetite and will eat anything that it can swallow, including invertebrates and small vertebrates such as mammals, birds, reptiles, fish, even turtles and other frogs. Bullfrogs have teeth in the roof of their mouth and a muscular tongue capable of flipping prey into their mouth. They’ll eat lots and lots of really big bugs, fish (guppies, I am told, are pretty good feeders) and mice. Bullfrog tadpoles are good algae eaters. Pretty much anything that will fit in their mouths. Large insects and worms should be left on the rocks, though these guys will eat them from the surface of the water too. Dead mice are best offered either by hand or using forceps (again, get the kind with round balls on the ends so you don’t risk injuring the frog when he lunges at the food!) It is generally recommended that you house these frogs alone (except for breeding) in order to avoid cannibalism.

These guys can LEAP pretty big leaps!! Around 3-6 feet (1-2 meters) in distance!

Bullfrogs are territorial and protect their territories by calls, displays, chases, jump attacks, and even wrestling. Male bullfrogs chorus at breeding ponds. Females also give aggressive calls and they respond to the breeding calls of the male frogs. Females are attracted to males with the territories that provide the most food.

Bullfrogs are fairly simple as far as accommodations are concerned with some shallow water and a few rocks (such that the frog can climb out of the water) can work. The water depth depends on how big the frog is; i.e. it should be deep enough to cover about half the frog.
Call Sunland Water Gardens @ (818) 353-5131 for availability! 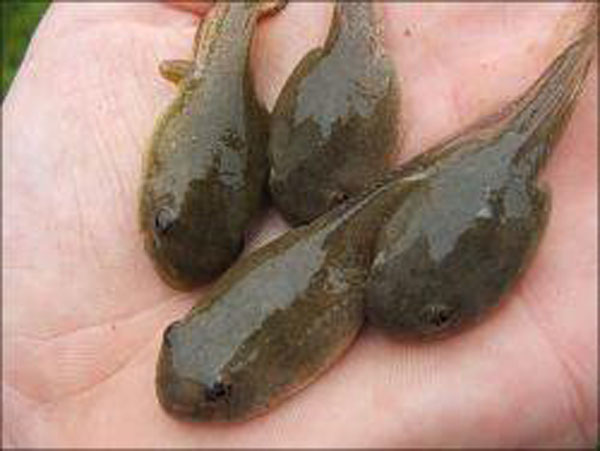 Areas we serve and more:

A leader in Pond Fish for Ponds – Algae Eaters For Ponds!