There are so many beautiful Koi to choose from but did you know that just like dogs or cats they are divided into breeds and varieties??

Koi is a short variation for the Japanese word Nishikigoi, which literally means “brocaded carp”

Color and pattern variations of Koi are endless

The color and pattern variations of Koi are endless, but breeders and collectors have identified a number of specific categories. This is a just a few of the more common and by no mean a complete list.

The main category is called Gosanke.

Gosanke is made up of the three main varieties of Koi:

Other major varieties are:

The Germans bred carp to have few or no scales to aid in processing them, as carp are the most widely farmed food fish in the world.
During the Meija Era, 1868-1912, the Japanese bred some of their colored Koi to two varieties of Doitsugoi. One is the smooth skinned leather carp, and the other has large, mirrored scales along the lateral line of the body.

Ogon’s are a Koi that is one solid color: red, orange, platinum, cream, or yellow. They can be metallic or regular.

“Tancho” means red cap. It is named after the Tancho crane, Japan’s red headed national bird. This variety is made up of Kohaku, Sanke and Showa with only a single red spot on the head. The Tancho spot must be between the eyes and preferably round. Red may not appear anywhere else on the body. When this is achieved, they are called Tancho Kohaku, Tancho Sanke and Tancho Showa. This Koi is considered lucky. The single red circle on the white head is reminiscent of the Japanese flag and thus is held in high esteem.

Asagi’s are one of the original Koi varieties. They have a red or orange belly that extends to the lateral line and red cheeks. The upper body should be a light blue-gray with the edges of the scales outline in white to form a net pattern. Pectoral fins should also be red.

Kinrin / Ginrin -a Koi with shiny scales. Kin means gold and Gin means silver. English translation: “Gold scales or Silver Scales.” These Koi have shiny silver or gold scales and must have at least two full rows of the Kin Rin or Gin Rin.

Koromo’s have a white body with a Kohaku pattern, but they also have blue grape-like clusters over the red.

There are so many beautiful colors combinations in the Koi world.  There is something for everyone’s taste. 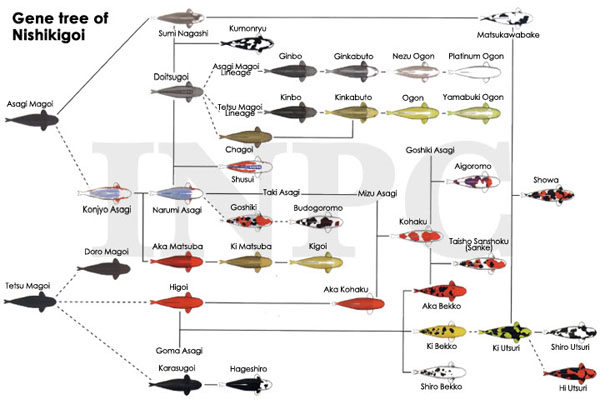